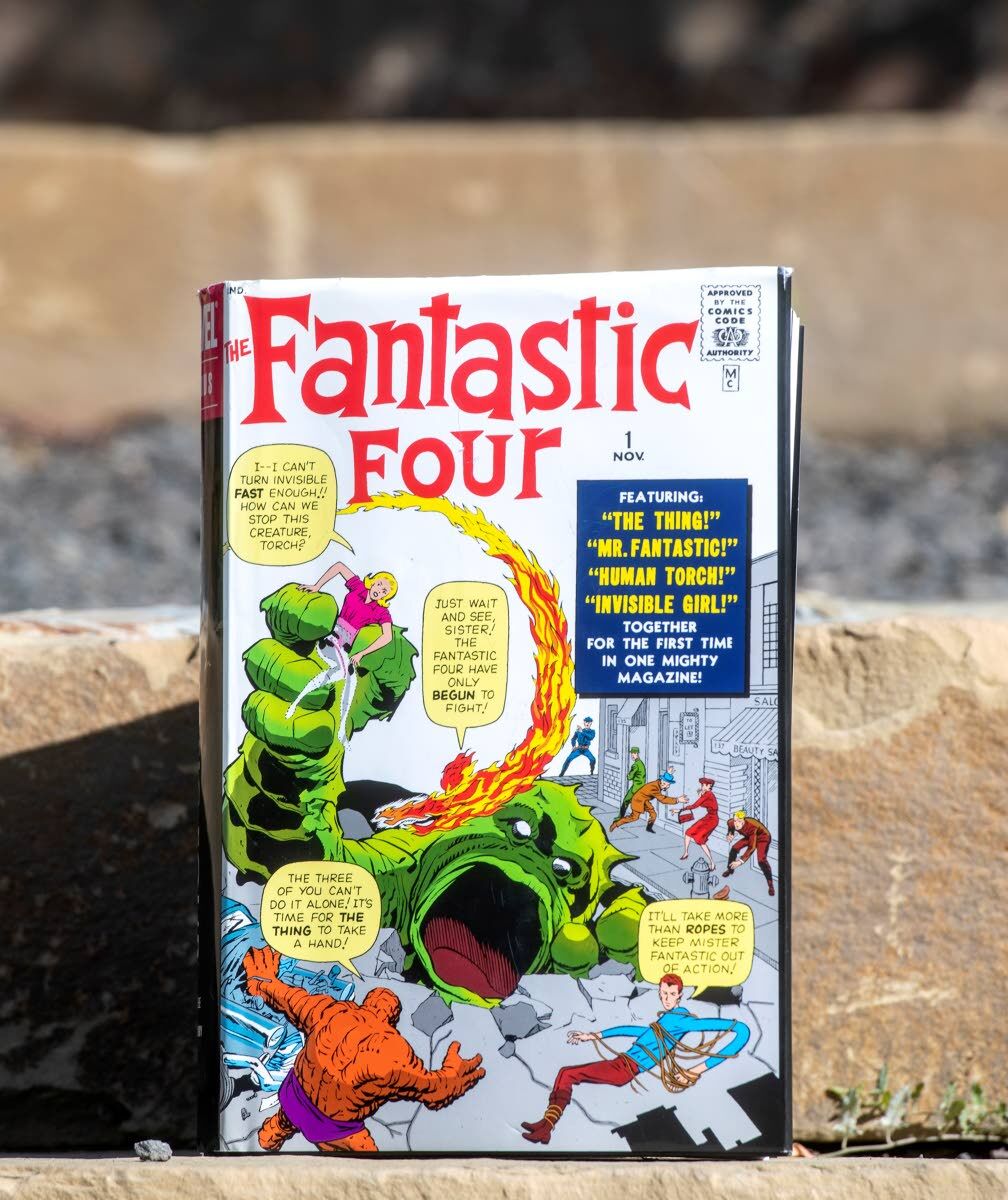 A Fantastic Four volume one omnibus sits on a set of steps at the University of Idaho Arboretum and Botanical Garden in Moscow. 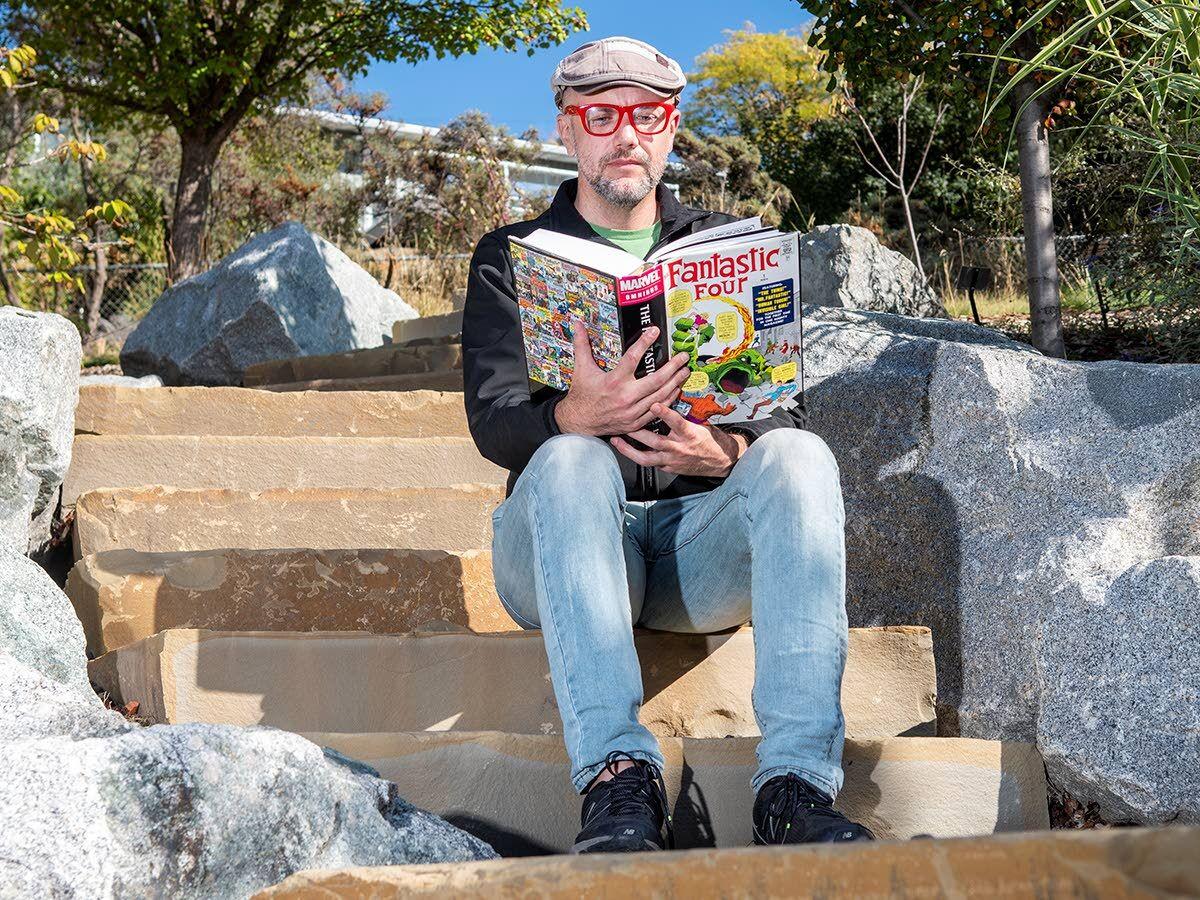 Roger Whitson, an associate professor of English at Washington State University, peruses a Fantastic Four volume one omnibuson steps at the University of Idaho Arboretum and Botanical Garden in Moscow. “I’ve always read comics," he said. "It’s like a comfort food to me." 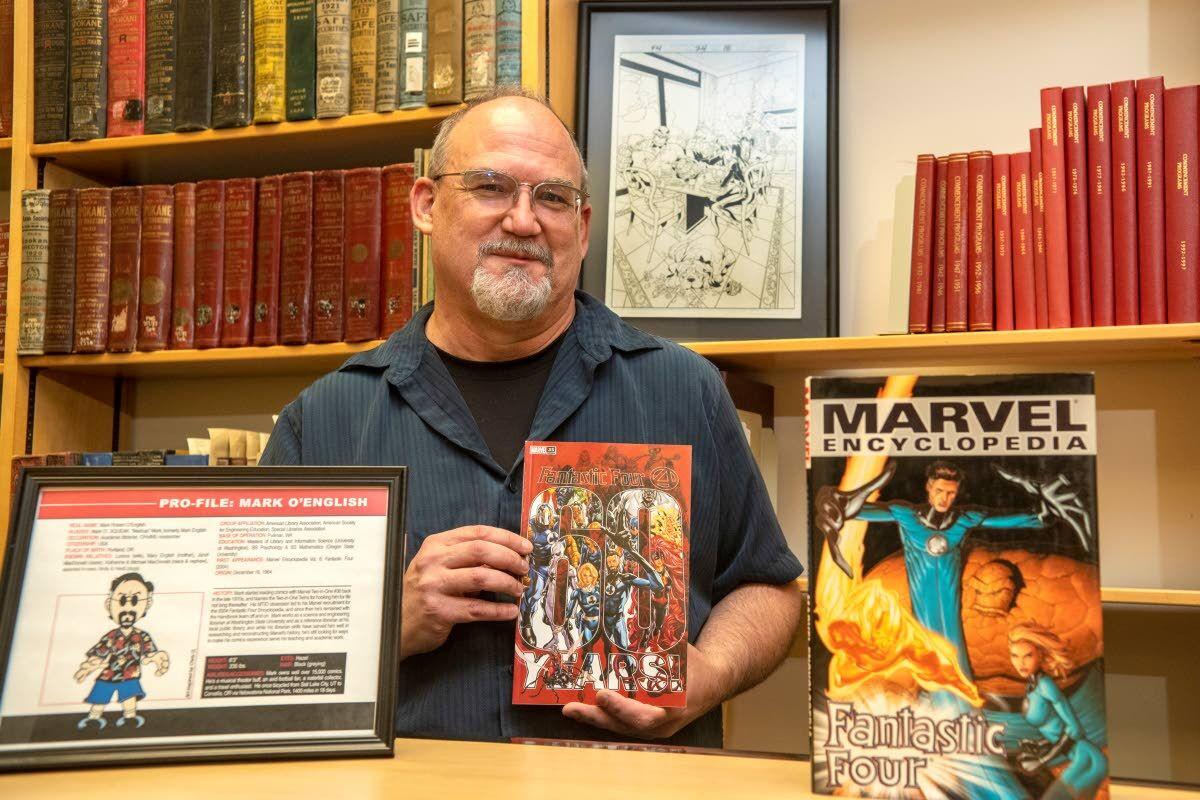 A Fantastic Four volume one omnibus sits on a set of steps at the University of Idaho Arboretum and Botanical Garden in Moscow.

Roger Whitson, an associate professor of English at Washington State University, peruses a Fantastic Four volume one omnibuson steps at the University of Idaho Arboretum and Botanical Garden in Moscow. “I’ve always read comics," he said. "It’s like a comfort food to me."

That beginning helped create a universe of superheroes from Spider-Man, to the Avengers, to the X-men and villains Dr. Doom, Galactus and Thanos. Today’s audiences can’t escape the Marvel universe. Its characters and stories are in our movies, on our television screens and still occupy our comic books. It’s a takeover that began in 1961.

The story goes that comic book publisher Martin Goodman heard about the success of DC’s Justice League of America, so he told his comics editor, Stan Lee, to write a comic book series about a team of superheroes. Lee and artist Jack Kirby came up with Fantastic Four, creating the company that eventually would become Marvel.

In the first issue, the Fantastic Four members were introduced to readers as a group of astronauts who go on an untested mission to try to beat the Soviets to space. Their spacecraft is hit by cosmic rays that genetically alter the characters.

Reed Richards becomes Mister Fantastic, who can stretch his body; Sue Storm is the Invisible Girl (later the Invisible Woman), who can become invisible and project force fields; Johnny Storm, Sue’s brother, can burst into flames and fly as the Human Torch; and Ben Grimm was permanently transformed into a rock creature known as The Thing. Together, they became heroes and Marvel’s first family.

While the publishing date on Fantastic Four Issue 1 is listed as November 1961, Mark O’English, university archivist at Washington State University, said the real date was likely in August. Publishers would postdate the cover date of the comics to increase the time they’d stay on comic book racks. Readers would think they were new, when really they had been on the stands for months.

Regardless of when exactly the first issue debuted, once it did, the comic book universe would never be the same.

O’English helped document the legacy that Fantastic Four left behind by working for Marvel from about 2003-08 as a researcher writing encyclopedias on the comic.

Marvel began printing bound encyclopedias at around the same time a fan named Jeff Christianson had a website called “The Unofficial Appendix to Marvel,” with biographical entries on the characters. O’English also began a website with summaries of the Marvel two-in-one comics he read as a kid. Eventually, O’English and Christianson helped each other out on their websites, and O’English got the call from Marvel.

While there, he would read issues of Marvel comics and write summaries for the encyclopedias that were both printed for the public and used as guides for Marvel writers and editors creating the current run of comics.

“We never did anything secondhand,” O’English said. “We were writing it up so it’s interesting and useful to the writers and editors.”

Lee and Kirby were the co-creators of the Fantastic Four, with Lee writing and Kirby as the artist — but who came up with the original idea for the superhero team is a tricky question among some Marvel fans and comic book historians.

Some fall into the Lee camp; others say it was Kirby. O’English falls in the middle.

“I don’t think you can say Stan Lee or Jack Kirby created Fantastic Four,” he said. “The truth is probably somewhere in the middle ground.” Developing comics is a team effort and also includes creative input from colorists and inkers, so to say one person is responsible doesn’t work.

O’English also said Lee was prone to exaggeration and likely was given more credit by the media than he deserved, something he doesn’t fault Lee for, noting he later publicly gave Kirby more credit for his contributions.

Roger Whitson, a WSU English professor who teaches a course on comics, said Lee was the marketer for Marvel comics, appearing on talk shows and in cameos in Marvel films.

“He was sort of the face of Marvel. Without his acumen and marketing talent, Marvel wouldn’t have gone anywhere at all,” Whitson said. “It’s hard to discount Stan’s role in making Marvel what it is.”

However, he also acknowledged that Kirby did the lion’s share of the work and got shortchanged both in terms of credit and money.

Kirby’s situation wasn’t unique either; it was common practice in the comic book industry. Artists at the time were contract hires and didn’t retain copyrights to the characters they created, which belonged to the company they worked for. Whitson said this changed in the ’80s as readers began following certain writers or artists, which led to those creators receiving more credit and compensation for their work.

With Kirby’s death in 1994 and Lee’s in 2018, the real story of the creation of the Fantastic Four might remain a mystery of Marvel history.

All across the crossover universe

Because Fantastic Four kicked off Marvel comics, it was the center of the Marvel crossover universe. In Fantastic Four issues, readers could see Peter Parker in the background or a team-up with Daredevil. Some characters, like Black Panther, were introduced in Fantastic Four. The crossover characters and events are a tactic also used in more recent Marvel movies to create the Marvel Cinematic Universe.

“Fantastic Four would’ve been the centerpiece,” O’English said. “It drove everything else. It was behind everything else the movies have made popular.”

He noted the heroes involved in the Fantastic Four comic book crossovers, like the Avengers, now lead their own movies in the MCU and are more well known to the average person. The Fantastic Four, long the center of the universe in the comics, was pushed aside in the films.

Whitson credits this shift to the way the film rights worked. Early on, Marvel sold rights of certain characters to various companies, and Fantastic Four went to 20th Century Fox. After Disney acquired Marvel in 2009, Fox retained the film rights to Fantastic Four. Because of that, Marvel Studios had to rely on the characters and franchises it owned to build its cinematic universe.

“They (Marvel) had to do that without Spider-Man, without X-Men, without Fantastic Four. It was a big risk initially, because those three franchises were their biggest characters for years,” Whitson said. “There were people who were really skeptical they could pull it off.”

Even though Fantastic Four has been excluded from the MCU, the group has had several films released by 20th Century Fox, which owned the rights to the team until it was bought by Disney in a merger that began in 2018.

A 1994 Fantastic Four film was never intended to be released and was made only so the studio could retain the rights. The unreleased film can now be found on YouTube.

Fox released Fantastic Four films in 2005 and 2007 with Ioan Gruffud as Reed, Jessica Alba as Sue, Chris Evans (who was later cast as Captain America for the MCU) as Johnny and Michael Chiklis as Ben. But box office sales weren’t enough for the studio to produce a third film.

In 2015, the studio attempted to reboot the franchise under the direction of Josh Trank. Behind-the-scenes drama, combined with poor box office receipts and dismal reviews from critics and fans, squashed all hopes for a sequel.

When Disney bought Fox and regained the rights, another Fantastic Four reboot was announced, this one with director Jon Watts, who also helmed “Spider-Man: Homecoming” and “Spider-Man: Far From Home.”

Despite others’ dislike of the films, O’English thinks they’re solid, though “they’re not ‘Iron Man’ or ‘Avengers: Endgame.’ ” However, he said the 2015 film was too dark to fit the hopeful themes of the Fantastic Four.

Like many Fantastic Four fans, O’English is eagerly awaiting the newest film. “I just don’t want to have a heart attack before the MCU Fantastic Four movie comes out,” he said. “I have high hopes.”

Cornerstone of a universe

Despite the Fantastic Four’s role in creating the Marvel universe readers know today, O’English admits its effect on the whole of pop culture has diminished.

“I hate to say it. I want it to be relevant,” he said. “I do think most of their importance and significance is in the early years.”

He said the series feels out of step and outdated, especially with the traditional nuclear family format. Now Fantastic Four is overshadowed by the big characters supported by blockbuster movies that came after the comic debuted.

“That’s how it works. It builds and becomes bigger and larger, and what comes first looks lesser in comparison to what comes after,” O’English said. “It was amazing at the time, and really was a world-changing thing at the time, but now it can look old, hokey, retro.”

Whitson, who grew up in the ’80s, read Fantastic Four comics, but it wasn’t his main title of interest. Still, he read the initial run from the ’60s and came to appreciate the contribution it made to the media.

As a whole, Whitson said Marvel has had a huge impact on pop culture, especially film. Its use of crossovers and shared universes created a new way of making movies, something other companies have tried, often unsuccessfully, to copy. The experiment, he said, “turned Hollywood on its head.”

The Fantastic Four working as a family is a central aspect of the team in their many decades in the Marvel universe.

“Fantastic Four has been fairly stable and the heart of things,” O’English said. “They never lose their family.”

Other superhero teams like the Avengers changed their lineup over the decades, but the Fantastic Four remained the same, for the most part (Reed and Sue separate for a time but come back together). Readers could see the characters grow and evolve as Reed and Sue got married and started a family, having kids who grew up in the comics.

“At some level they (Fantastic Four) feel like the heart of the Marvel universe. The heart and intellectual leader of the universe,” O’English said. “They do have a different relationship than any other group you see out there. I’m hard-pressed to think of any other family, as opposed to a group of people coming together. It forced the group to stay together. Maybe that’s why it’s the heart of Marvel.”

DC vs. Marvel: A never-ending rivalry?